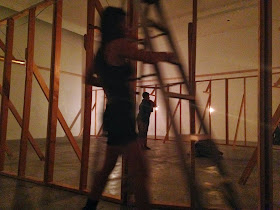 niv Acosta’s performance tonight at Human Resources in Los Angeles was called “DIED IN YOUR ARMS”. It was part of Base Sessions- a series of performances, workshops, and rehearsals... a festival of choreographic-types, hosted over seven days. Besides the obvious cultural richness that the Human Resources big white room so energetically maintains, this dance was situated within the ongoing, ever-changing 2x4 and lighting structure constructed and reconstructed by artist Lauren Davis Fisher. Fisher describes on the Base Sessions website-


As these sculptural, architectural environments are built, broken down and rebuilt, structures and spaces contract and expand between the set and the unraveling. Exploring the disorientation of a mutable situation and the possibilities of inhabiting a position of perpetual transformation.


Fisher’s piece is titled New Structures, New Orientations: a fitting theme for Acosta’s multi-segment, multidimensional offering. The performance began with Acosta casually entering the peninsula shaped structure and dropping a pile of grey blankets. The audience was situated on what seemed to be the outside, backs against the walls, looking in. Fisher, with hammer drill and ladder by her side, began to deconstruct aspects of the partitions as Acosta initiated his movements. Immediately a contrast was created between Fisher’s role performing light labor and Acosta’s casual yet fierce vogue-style movements. The black body and the white body were present, not to be overlooked. A worker and a dancer. A woman and a man. Neither conventional in their embodiment of gender representations. Queer bodies generating a queer space and in turn an entrance into the psyche of what I was watching.


At this point it was not clear why the queer body was presented so perhaps I am too quick to assign specificities, meaning, subjects… Is it an issue of representation? A default reaction? A tendency toward categorization? But as with much dance I experience; I watch a body in space and begin to analyze the many positions it occupies within the broader cultural landscape in which it dances, or by which is inspired to dance.


The duet continued in silence, save the hammer drill every so often when Fisher was removing or inserting a screw. Acosta’s movements became larger and more visually articulate as he moved to his knees or extended his hands over head. It was calming to watch the two: Acosta helicoptering his hands almost flamboyantly, and Fisher carefully taking a dimly lit light bulb from one side of the partition to the other. About halfway through Fisher’s task there was a shift in the rhythm. Fisher walked in the center to meet Acosta, and they stood quietly, staring at each other for a short time. Then a loud, startling acapella recording of what I’m guessing was Acosta’s voice interrupted the silence, singing “the hills are alive” on loop and with added filters as it continued. The phrase became shorter and quicker in its looping until it became a single tone pulse to move by. Fisher resumed her position working and Acosta transitioned into more expansive movements, travelling throughout the space.


Acosta finished his choreography before Fisher finished her task, and he calmly stood aside to watch as the final screws were removed, lumber relocated, and drilled into its new position. Acosta then interacted with the pile of grey fleece blankets by taking them one by one, evenly distributing in both hands, and turning them into undulating wings. The form briefly reminded me of the homeless individuals I see on the streets of Los Angeles and New York, carrying blankets and duvets in search of shelter for the night. His tornado moved throughout the space like waves crashing against docks. Docks or buildings? Was this a reference to an angelic ascension? An illustration of a natural disaster? He is a New Yorker after all and the damages from hurricane Sandy still remain. He is a New Yorker after all and the demands of the city often induce desires of transcendence. And flights of fancy. And reasons to dance. Let’s get lost in the metaphor, that’s what’s there for…


But, am I being hasty with my interpretations of representation? This is dance after all; an abstracted temporality where things can become things they normally are not. Feel the freedom, man. But dammit, I demand specificity! So where can that come from? Are my associations rooted in the learned stereotypes of mainstream representation, of media caricatures? From the demonized bodies of color, of queerness, of largeness, of radicality and difference? I mean, can a living body actually be unconventional?


Luckily for you and for me my whirlwind of confliction was addressed when Acosta exited the wooden framework, sat calmly on a chair in a corner, opened his diary and read into a microphone. His monologue lasted only a few minutes but its brevity did not reduce the complexities of its content. His free flow writings announced reflections on his own body mixed with allusions to social injustice and the psychological effects of being unconventional, disliked, confused and even hated in our culture. There were poetic references to pop culture and moments I didn’t fully grasp. Some moments were specific, others theoretically oblique. It was not preaching- it was too personal for that. Personal and political. Acosta did not present solutions or even explicitly call for change. It was instead an entrance into the mind of a young person who is brave enough to share his experience by making art from it.


So when Acosta ended his reading, walked back into the center of the space, gathered the blankets yet again, and collapsed beneath their thick grey cover, it didn’t seem so abstract. The chain of actions he presented over the course of the performance became conjoined as a metonymy. The incorporation of language harnessed the abstraction, subjugated the interpretation and kept the work from being just anything someone wants it to be. This structural tension created by the artist illustrated, complicated, and expanded the endless psycho-social navigations between who we think we are and who we are made to be, between how we want to feel and how we are made to feel, between work and working… It was echoed perfectly when after a bit of silence Acosta, back in the cage, began singing from under the blankets a short song starting with the phrase “I will be for you…” 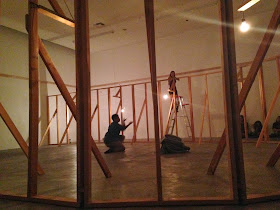